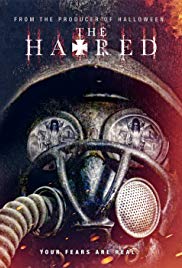 Writer/director Michael G. Kehoe’s THE HATRED (2017) has a couple things going for it but not enough to elevate it above being anything other than a passable horror film.  Andrew Divoff stars as Samuel Sears, a man who leaves on the outskirts of town with his wife and his daughter away from the outside world in total isolation.  When his daughter tries to defy him, in a fit of rage he murders her and hides the body so that his wife doesn’t find out.  Instead, he claims that his daughter ran away which doesn’t hold water to his wife.  After the police leave there home for further investigation Samuel is killed by his wife who then, with nothing left to stay, leaves her home to rot.

Years later, Samuel’s home is resold to a new family.  Regan (Sarah Davenport) arrives  at the house with a group of friends to see to the new owner’s young daughter Irene (Shae Smolik) but then soon run afoul when they discover secret documents claiming that Samuel may be a former Nazi who was charged with the protection of a magical amulet with the power to harness “hatred” of those in its possession.  Soon Regan and her friends run afoul of an evil spirit that will unleash all the hatred that has been building up in the house once lived in by a Nazi and his reclusive family.

Divoff does the best he can with the material in regard to the elongated opening of the film (I doubt he was on set for most of the production).  The rest of the cast actually do a great job, overall, but the film itself lacks credibility and nuance to elevate it above the typical horror film cannon fodder.  The film looks good and I love the costume design for Divoff’s character but it’s still just an easily forgettable horror film.