Justine (Haley Bennett) is alone on her college campus during the Thanksgiving break in the film KRISTY (2014).  Her boyfriend Aaron (Lucas Till) is with his family, whom she can’t stand and she can’t afford to go home right now so Justine plans on spending her alone time catching up on homework.  A chance meeting with Violet (Ashley Green) in a gas station will turn Justine’s holiday into a nightmare. 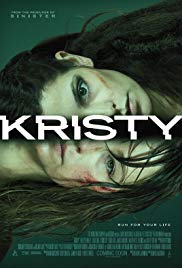 Justine soon discovers that Violet has followed her back to her college campus and brought along with her three masked men all with the purpose of torturing and then killing her.  Now Justine must evade these killers as they hunt her down all over the campus armed with only her wit and ability to stay alive.

Written by Anthony Jaswinski and directed by Olly Blackburn this is a very capable film that treads well warn territory but presents it in a new and exciting way.  It helps that the cast is exceptionally good as is the cinematography, which brings menace to every corner of the campus.  This is a surprisingly entertaining and engaging film as Bennett really brings empathy for her character.