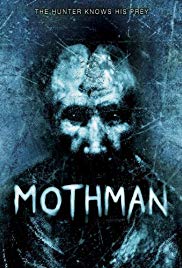 MOTHMAN (2010) the familiar horror film story about a group of friends who when they were young did a horrible thing that led to the death one of the group.  Years later the group finds themselves all together again and something is killing them one-by-one.  This derivative horror film is led by the talented Jewel Staite (of TVs Firefly) who plays Katherine Grant, a reporter forced to return to her hometown for a story about the Mothman Festival.  Her return home triggers the arrival of the real Mothman that starts to kill Katherine’s friends in order to avenge the wrongful death that they covered up years before.

Unless you’re truly a fan of the Mothman legend and mythology then there will be little for you in this film despite the presence of Staite who does her very best with the material despite the bad CGI FX in regards to the Mothman himself.  Screenwriters Sung-Jin Lee and Patrick Walsh try to add flavor to the story by adding hints of the actual Mothman legend to the story but since it is all background info and nothing that really is pertinent to the actual story it all adds very little.

Once the Mothman makes itself known the action does kick into high gear with some sequences that feel out of place but they at least give the film a boost of much needed energy.  This Mothman film is not one that will either educate you about the nature of the myth or legend nor will this film entertain you enough to care.  There are other Mothman films that you can search out for if you need something to occupy your time.