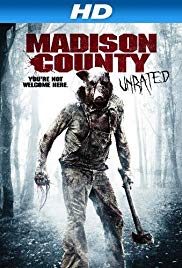 It’s hard to describe the film Madison County (2011) without also describing a whole lot of other films just like it.  A group of college kids travel to an old mountain community called Madison County in search of the truth about a killer based on the account of a writer from the town.  The moment they arrive they realize that the town is a place they would rather keep their secrets secret as they have no idea who the writer the kids are looking for is and they claim that there never were any killer or murders.  What they do get is a warning to get out of town as soon as possible.

The group don’t heed the warning and upon further investigating they soon come across a killer wearing a pig’s head who starts to knock them off one by one (or capturing them for later).  There is a subplot involving the writer who has to bring sacrifices for the pig killer but little really makes much sense in this film that strives to give a little more plot to the tire “Wrong Turn” story yet never actually accomplishing it.  The death are pretty gruesome and effective and the film is well filmed but there isn’t anything that really differentiates it from the countless (and endless) Wrong Turn sequels and its brethren.  The characters are not at all that interesting and neither is the killer for that matter.  It’s a pretty dull affair from beginning to end.

Written and directed by Eric England the film tries to bring something new to the backwoods killer film but fails to deliver on the goods.