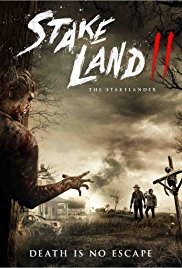 Writer/actor Nick Damici returns to the post-apocalyptic world of vampires with STAKELAND II: THE STAKELANDER (2016).  The original film was a surprisingly refreshing new look at a world in which vampires are the dominant species and the humans have almost been run to extinction.  In the new film Martin (Connor Paolo) is all grown up and is on a quest to search for Mister (Damici) the only person he thinks can help him defeat The Mother (Kristina Hughes) who is responsible for the death of his wife and child.  Martin will stop at nothing to get revenge but on his journey through what’s left of the world he will discover new enemies that may be more dangerous than the vampires.

Damici again writes this film which sees Martin take center stage while Mister is depicted as a vamp hunter nearing the end of his days.  There are a lot of new characters added for this film including new companion The Lady (Laura Abramsen) who is a mute and feral women attached to the hip of Mister and some old friends Bat and Doc Earl (A.C. Peterson and Steven Williams, respectfully) that add flavor to the film.  The film is directed by Dan Berk and Robert Olsen and even though they are nearly as adept as Jim Mickle with the original, this film still does have it’s moments.

This film’s greatest weakness is that nothing seems fresh or original any more as it all comes off as something seen better in other films.  This being said, fans of the original film (and vampire films in general) will find something interesting in this film including the fact that it’s open ended for a possible sequel.