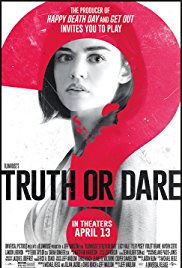 Olivia (Lucy Hale) is the perfect college student who during Spring Break is supposed to be volunteering for a good cause until her best friend Markie (Violet Beane) convinces her to go to Mexico with all their friends for one last great week together before their adult lives kick in.  Therein, is the catalyst for TRUTH OR DARE? (2018).  On their last week of Spring Break, Olivia befriends the seemingly harmless Carter (Landon Liboiron) who takes them all to an abandoned church to drink and party and play a game of Truth or Dare.  Everything seems harmless until Carter reveals to the group that they have now become part of a game that if they refuse to play will be the end of their lives.

Now, Olivia and her friends must film a way to beat the game before they all find themselves dead or worse.

The mythology of the film/game, although convoluted, is not all that bad even at it’s most ludicrous as the cast does a good job of selling the premise.  Written by Michael Reisz, Jillian Jacobs, Christopher Roach, and Jeff Wadlow (who also directs) the film comes off as over written as everything in the film fills like it needs to be explained and justified.  This unfortunately prevents the film from having any real suspense and is not nearly as interesting as it could have been.  This being said, the film looks great and has a very good musical score from Matthew Margeson.  This is just one of those films where less could have been more in order to craft a compelling and terrifying horror film.