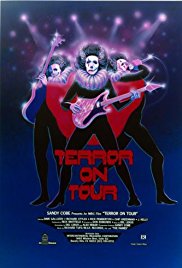 There’s nothing like a film that tries to mix horror with rock ‘n roll which is exactly what you get in TERROR ON TOUR (1980).  Written by Dell Lekus, the film follows a rock band called The Clowns that are on tour when several prostitutes start getting killed by someone looking in their iconic clown get up.  While not the most engaging of characters, the band members just want to play good music while someone keeps killing random people and fans alike.  As the killings get closer to home it becomes very clear that someone in the group or associated with the group is at the center of the murders.

The film itself is pretty bland and has aged horribly.  In addition to the bad acting and mediocre gore, none of the characters are at all interesting and neither are the deaths on display.  The film was released at the height of the slasher boom of the ‘80s and was released before ROCKTOBER BLOOD (1984), TRICK OR TREAT (1986), and BLACK ROSES (1988), to name a few, and therefore doesn’t have the gloss of those more cult films.

This is not a film that you need to seek out, not even for horror fans as it is completely forgettable.