Seven friends decide that after a night of drinking that the best way to cap off the night is with a trip to an abandoned hotel that is rumored to be haunted in the film HORROR STORY (2013).  Now, I’ll forgive the film for the oblivious cliché of a horror set up even though there is no logical explanation given for these seven friends to ever even be interested in going to an abandoned and rumored haunted hotel but without these characters’ bad decisions we wouldn’t have a horror film to watch. 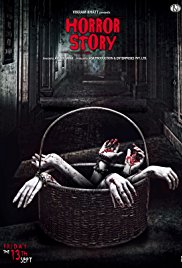 There is not an original story element to be had in this Hindi horror film which borrows heavily from horror films from the ‘90s.  Characters make stupid choices that usually end up pretty bad for everyone.  This being said, the film itself looks really good with some amazing production design for the abandoned hotel.  The film is very creepy and the actors, despite doing the best that they can with the material, are not all that bad either.  The film has a lot of atmosphere with some engaging cinematography that fits the story and moves the plot along.

Unfortunately, all these great elements are lost in a film that is over twenty years past its expiration date.  An interesting film for horror fans looking for something else but little else.