Writer/director Franck Khalfoun is the latest to tackle the undying Amityville franchise with AMITYVILLE: THE AWAKENING (2017).  The style and suspense from Khalfoun’s previous films P2 (2007) and MANIAC (2012) are lost in this remake/reboot of the Amityville story that at times acknowledges the existence of the original two films as a means to keep the story fresh in an age where every possible franchise is being rebooted. 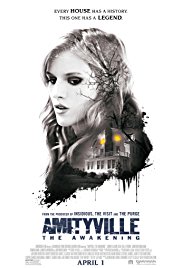 Joan (Jennifer Jason Leigh) is desperate to move her invalid and comatose son James (Cameron Monaghan) to the hospitals and doctor that can best be able to help him recover.  This is contrary to her daughter Belle (Bella Thorne), James’ twin who believes that her brother is too far gone and they should just let him die in peace.  Moving into the infamous Amityville house is supposed to help the family financially but it doesn’t take long before Belle realizes that something in the house has nefarious plans for her and the rest of her family.  When James starts to magically recover from his condition, Belle seeks out answers to prove whether or not the house is to blame but it leads her down to some deep family secrets and trauma.

This all seems like an interesting plot to delve into but most everything on display has been down in previous films in the franchise including The Haunting in Connecticut (2009), another “based on true events” ghost story.  No gore is on display and for the most part the film plays it completely safe.  Rumors say that Khalfoun originally made a Rated-R film that was then trimmed down to a PG-13 but regardless, without more original ideas the end result probably would have been the same.  This is a sleek and great looking production with a very good cast that just cast elevate this mediocre material.