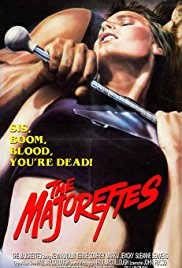 High school girls start showing up dead in THE MAJORETTES (1987) based on the novel by John A. Russo (writer for the original NIGHT OF THE LIVING DEAD).  Here, Russo also writes the screenplay with another alumni of NOTLD Bill Hinzman taking over here as director.  Like many derivative slasher films of the late “80s, The Majorettes has sex and gore and nudity, but little else.  The film lacks the ambiance of Halloween or the sheer (implied) brutality of Texas Chain Saw Massacre.  It lacks the originality of Hellraiser or the makeup FX of The Burning.

In fact, there is very little to The Majorettes other than the star talent behind the camera as the cinematography is lacking as the iconic music.  It’s interesting that this is the first of the only two films Hinzman directed (the other is FLESHEATER, which also is not that good of a film either).  Russo, on the other hand, wrote the screenplay for the film based on his novel and went on to write, produce, and direct other films based on his novels.

The Majorettes is a film for Russo and Hinzman fans and little else even if you can appreciate the the trash cinema of the ‘80s slasher boom.