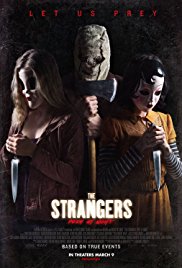 It’s been ten years since the previous film polarized audiences but now, THE STRANGERS: PREY AT NIGHT (2018) seeks to do for modern audiences what the original did a decade ago.  Unfortunately, it’s a little too late.  Dollface, Pin-Up Girl and the Man in the Mask (Emma Bellomy, Lea Enslin, and Damian Maffei, respectfully) have hit the road after the previous massacre to now menace a new family that have found their way to a summer trailer park that’s currently off season.  Their latest victims are husband and wife Mike and Cindy (Martin Henderson and Christina Hendricks, respectfully) and their two children Kinsey and Luke (Bailee Madison and Lewis Pullman, respectfully).

Mike and Cindy are driving Kinsey to a new school after being kicked out of the previous one as she has become unruly and uncontrollable.  Kinsey’s attitude has finally tested the resolve of the family for the very last time.  They plan to stop overnight at the trailer park which is run by other family members but right off the back things are strange as no one greets them upon their arrival and everything seems to be too quiet.  When a strange girl shows up at their doorstep looking for someone else their nightmare truly begins as they must find a way to escape the trailer park when there is a killer at every turn watching and waiting.

Written by Ben Ketai and directed by Johannes Roberts the film retains the atmosphere and dread of the previous film even though the location has been opened up to more than just a single house.  What the film lacks are compelling characters as all the characters either make bad decisions or (regularly) act like victims instead of fighting back in a logical way.  Most of the film’s visual and suspenseful techniques are wasted on clichés and things done better in other similar films.
Not a completely horrible film but you expect more from a sequel that took a decade to finally see the light.