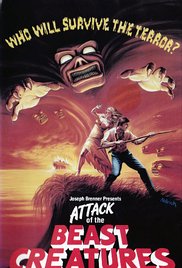 Danger awaits a group of survivors from a luxury cruise liner who get ship wreaked on a deserted island in Attack of the Beast Creatures (1985).  The survivors are made up of a diverse group of both crew members and passengers (Robert Nolfi, Robert Lengyel, Julia Rust, and Lisa Pak, to name a few) some of who are at each others throats the moment they land on the island but their personal quibbles are nothing compared to the danger on the island from dangerous plants and acid pools that burn your flesh off to the touch to the miniature terror of beast creatures that inhabit the island and feast on the flesh of everything they come into contact to.  Now the survivors must find a way off the island as they are picked off one by one by the little creatures that seem to be everywhere watching and waiting to strike.
This ‘80s film is littered with bad acting and even worse creature FX (even for a low budget film) in this basic premise of man (or woman) verses nature film that’s barely entertaining despite the copious amounts of blood on display.  The film could have been better (in the entertaining area) if not for the look and execution of the creatures as the premise of a group of survivors on an island filled with little killer creatures could have been excellent but this is otherwise a film better left dead and buried.

If you do happen upon it, at least it’s short (at a meager 82 minutes) and lots of the cast meet a gruesome fate even if it is by a crappy looking monster.
Posted by Kevin L. Powers at 3:56 PM