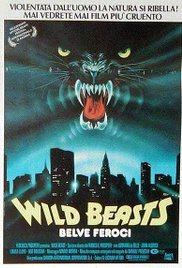 The “80s Italian production The Wild Beasts (1984) sees the water supply of a zoo contaminated by PCP which drives the animals crazy and they eventually break out of the zoo to cause panic and chaos in the city.  Written and directed by Franco Prosperi, an animal expert and police inspector fight against time to save as many people as they can from all the wild animals while also trying to recapture as many as they can in the process.

Being an Italian production there is plenty of violence and death to be had in the film even where children are concerned.  Although very basic and straight forward the film is still entertaining (as most ‘80s Italian horror films) and even has many great sequences with wild animals menacing humans (before CGI became the norm).

The entire cast is pretty good (Lorraine De Selle, John Aldrich, Ugo Bologna and Louisa Lloyd, to name a few) but what audiences want to see are the wild animals and there are plenty of them here.  What starts off as simply rats infesting the city ends with a giant bear menacing everything in its path.  Not the greatest of “80s Italian horror films but it is entertaining.
Posted by Kevin L. Powers at 4:05 PM