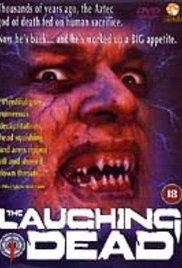 A priest who has lost his faith is at the heart of the possession horror film The Laughing Dead (1989).  Catholic priest Father O’Sullivan (Tim Sullivan) is escorting a group of tourists into Mexico to visit the Aztec ruins.  He’s having a crisis of faith stemming from the fact that he had an affair with Tessie (Wendy Webb) which yielded a son Ivan (Patrick Roskowick) and they both just so happen to be a part of his tour.  It also happens to be the Day of the Dead festival and the evil Dr. Um-tzec  (Somtow Sucharitkul) plans to resurrect the Death God.  Dr. Um-tzec uses O’Sullivan as a vessel for the Death God but also needs hearts of children to sacrifice of which Ivan is a prime candidate.  Now O’Sullivan must fight his possession of the Death God before he kills Tessie and his son or any more innocents that get in his way.

Not a particularly interesting film.

Written & directed by Sucharitkul the film is dull and at times rather boring and uninteresting due to the script and the lazy handling of the material by the cast who all pretty much seem bored in the film.  There are a few moments that perk up but these are few and far in between creating a film that is a slosh to get through.  Make-up FX are pretty standard low budget (or no budget) ‘80s and there is nothing in the film that will have you calling it a cult classic of any kind.  Just another highly forgettable ‘80s film.
Posted by Kevin L. Powers at 4:09 PM