"Rants & Ravings About Horror" - “A Look at the CRITTERS Franchise!”


“A Look at the CRITTERS Franchise!” 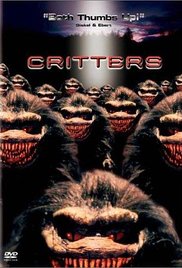 The first thing most people will say when I mention the film Critters (1986) is, “What the hell is a critter?”  If you grew up in the ‘80s (or love ‘80s horror films) then you know good and well what the film Critters is and just how big it was having spawned three sequels.  Not only did the original film star Dee Wallace (of Cujo, The Howling, E.T. The Extra-Terrestrial and countless others) but the film also made a young Scott Grimes an ‘80s star (he starred in the first two films in addition to cult favorite Night Life before disappearing into TV purgatory for the rest of his career).

The original Critters was one of my favorite films growing up which is why I’d like to take some time to remind audiences just how great this film and franchise was.  In the original film Grimes plays Brad Brown who’s a smart yet troublesome son to Wallace’s character.  He has a less than exciting life on the farm which is why he seeks out danger and excitement wherever he can (to the detriment of the rest of his family) getting his best friend Charlie (Don Keith Opper) in trouble every chance he gets.  His life is turned upside down when a band of furry and deadly extra-terrestrial renegades called Crites crash lands on Earth in Brad’s small town and wreak havoc killing and eating everything in their path.  It is up to Brad and Charlie and a couple of shape shifting bounty hunters to capture (or kill) the Crites before they multiple and destroy everything which includes Brad and his family’s farm.

Because of the film’s dark humor, the situation never goes into camp territory as innocent people die and are put into real danger.  Similar in to tone to other films of the decade like Gremlins (1984), The Howling (1981), The Gate (1987) and Poltergeist (1982) the humor never over shadows the horror and the horror never goes too far making it fit for both young and older audiences.  The Crites may have looked all cute and cuddly but like Gremlins they were anything but creating a memorable monster.  The film was written by Domonic Muir and Stephen Herek, who also directed.  This was Herek’s debut feature and he would go on to direct such films as Bill & Ted’s Excellent Adventure (1989), Don’t Tell Mom the Babysitter’s Dead (1991), The Mighty Ducks (1992), Mr. Holland’s Opus (1995), 101 Dalmations (1996), and Rock Star (2001).  The closest he ever came to directing another horror film was the feature of Dead Like Me: Life After Death (2009).  Muir has made a career at writing shlock for Full Moon Entertainment (and its various associated companies and under various other names) with Evil Bong (2006), Decadent Evil (2005), Doll Graveyard (2005), The Gingerdead Man (2005), and Puppet Master: Axis of Evil (2010), as well as numerous sequels to these films.  Neither one would return to the heights of horror as this film. 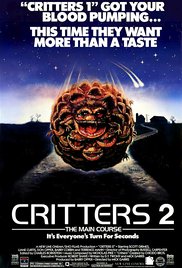 With the success of the first film most of the cast returned to be a part of Critters 2: The Main Course (1988) which was this time conceived by future horror and sci-fi masters Mick Garris (Psycho IV: The Beginning, Stephen King’s The Stand and Desperation and Bag of Bones and The Shining, among many more) and David Twohy (director of all three Pitch Black/Riddick films, The Arrival, and writer of Warlock, The Fugitive, and G.I. Jane).  Grimes returns as Brad who returns home years after the original invasion of the first film to a town where he is a pariah.  Bad luck seems to follow him as eggs that had gone undetected from the original infestation hatch and multiple creating a whole new menace bigger than the first.  The shape shifting bounty hunters return and chaos erupts again.  This film has more action than the original and plenty of death and chaos including an amalgamated monster for the finale.  It even gives Brad a love interest while also playing up the humor more than the first film (without sacrificing anything in the process).  I loved this film just as much as the first one and watching them back-to-back was a common thing in my house 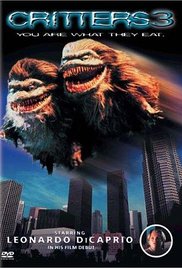 Critters 3 (1991) would see a lot of changes, mainly that just about everyone from the previous two films do not return in any capacity other than Don Keith Opper as Charlie McFadden who’s become a bounty hunter without a real job until the Crites return to menace a Los Angeles apartment building.  The screenplay is written by celebrated horror author David J. Schow, whose other film credits include The Crow (1994) and The Hills Run Red (2009).  This film is light on the horror and heavy on the comedy (without actually being humorous or funny) and for the most part falls flat because it’s confined to an apartment complex.  The end result feels more like a Troll (1986) knock-off and less like a Critters film.  The film is only remembered because it stars a (very) young Leonardo DiCaprio.  Ethan Phillips of Star Trek: Voyager has a small role but other than that the film is forgettable.  The film is directed by Kristine Peterson who is better known for her work as assistant director on Chopping Mall (1986), Nightflyers (1987), A Nightmare on Elm Street 5: The Dream Child (1989) and Tremors (1990) and who hasn’t directed a feature since Slaves to the Underground (1997).  The Critters franchise would seem dead at this point with nowhere else to go…but space! 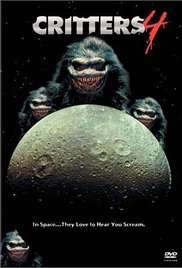 Critters 4 (1992) sees Charlie (reprised by Opper) cryogenically frozen and resurrected in the future on a space ship with a crew of rough riders who don’t realize the deadly menace of the Crites.  Like the previous film Charlie is confined in a single location and needs the help of the locals to help him fight the alien menace once and for all.  Schow returns to write the screenplay with Joseph Lyle with a story by Barry Opper and Rupert Harvey, who also directs.  Along for the ride this time is horror icon Brad Douriff (the Child’s Play/Chucky franchise) and Angela Bassett (What’s Love Got To Do With If?, Supernova, Vampire in Brooklyn, and American Horror Story).  This film is more fun than its predecessor for no other reason than it plays up the comedy a whole lot and there is no horror to be had in this film.  It’s in space so the absurdity of the whole premise goes in its favor.  There’s even a brief appearance by Terrence Mann as Ug, the bounty hunter from the first two films.

All in all the entire Critters franchise is a mixed bag as is most any horror franchise spawned from the ‘80s.  The first film or two balances the humor and horror very well but by film three there’s no longer anything to be afraid of and by the forth film you’re only still watching because the monsters are funny and the story goes in a ludicrous director so you can’t help but just go along for the ride.

Growing up I continued to watch the first two films all the time but the third and fourth films were saved for those special “franchise” binge watching days.  If you’ve never watched any of the films they’re worth checking out if for no other reason than they gave a lot of future horror talents their start.  I recently rewatched them and still enjoy the first two films although (surprisingly) the second film holds up the best while the first film (although dated) is still an amazingly raw film which still packs a punch.