When an exotic animal smuggler runs afoul of the police his cargo is thrust into the nearby lake.  This cargo happens to be a bull shark and it’s found a new source of meat which is human.  This is the set up for the film Shark Lake (2015) starring Dolph Lundgren as Clint Gray, the so-called animal smuggler who gets five years in prison after he is caught by the police.  When he gets out of prison his little daughter Carly (Lily Brooks O’Briant) has been adopted by the police woman who captured him – Meredith Hernandez (Sara Malakul Lane), who will stop at nothing to protect Carly from her criminal father. 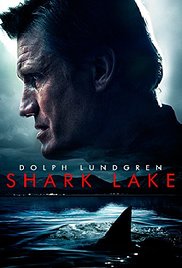 Clint’s not out of prison for even a day before he realizes that his shark has been killing the locals and that the original owner of the shark (who also happens to be a mob boss) has waited five years for Clint to return his property.  Now Clint must find a way to capture the shark before it kills any more people and before Meredith puts him in jail for thinking he’s the same criminal he was before he went to jail.

Besides being saddled with a mediocre script with nothing remotely interesting or original, Lundgren seems to be going through the motions in the film.  He’s given nothing to actually show off his talents and it seems as though he’s bored throughout the entire film as if he’s just doing it for a paycheck which probably exactly how he got involved in the film to begin with.  Most of his scenes seem shoehorned into a screenplay that focuses primarily on Meredith and her obsession with protecting Carly from her father.

Unfortunately, Lane makes for a very unconvincing police officer who ignores police procedure and breaks more rules than she enforces.  Lane also doesn’t have the experience to be a convincing lead for the film as well.  The character is bland and uninteresting.  The CGI is also sub-par (which seems to be the norm for these types of films) and most of the kills are off-screen and surprisingly bloodless.  For a killer shark film this is a pretty bland affair better left floating in the water.
Posted by Kevin L. Powers at 6:07 PM