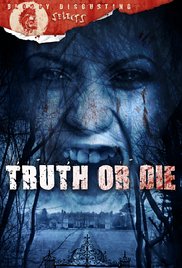 Even though it has a very common plot behind it, I was actually entertained by the by-the-numbers film Truth or Die (2012) which has a group of British students being lured to a mansion out in the middle of nowhere to celebrate the birthday of a former classmate they all made fun of years before.  When the friends get to the mansion they realize that no one else is going to show up, not even the birthday boy himself but instead only the birthday boy’s older brother.  Since there is free booze they all decide to stay anyways and have their own celebration but as the night draws on they soon realize that they’ve been lured there under false pretenses and that they must play a deadly game of truth or dare in order to survive the night as one by one they are put to the test to reveal what really happened the night they all decided to play a harsh joke on the missing birthday boy.

The reason why the film is so effective is because the cast is really good in this cabin in the woods thriller where secrets come to light that reveal each person in the room cannot trust each other.  Written by Matthew McGuchan and directed by Robert Heath, Truth or Die keeps you on the edge of your seat simply by playing against your expectations.  It also helps that the film has a great location on hand and the production design is impressive, even though for the most part the film is in a single location.

In less capable hands this could have easily been a film that falls flat but this is an entertaining film that’s worth taking a look at if you like these type of close quarter thrillers.  It even has a few moments of gore thrown in just when you least expect it.
Posted by Kevin L. Powers at 1:26 PM