I remember seeing the VHS box for the ‘80s film Spookies (1986) in my local video store and despite the box being very cool, I never picked up the film.  Over the years I’ve heard a lot about the film and tried to see the film thinking it was one of those great horror films that just passed me by.  Unfortunately, when I finally saw the film, it was one of those films better left forgotten and hasn’t aged well at all. 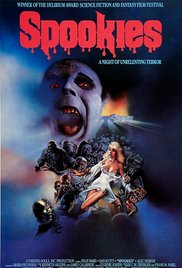 A group of people find themselves trapped in a house by a Sorcerer who wants to sacrifice them all in order to restore his wife to him.  The film has zombies and monsters of all types which is a great thing except its packaged in a film with brain dead characters and bad acting.

To be fair the makeup and FX are pretty good coming from Gabriel Bartalos, who has worked on everything from Darkman (1990) to Gremlins 2: The New Batch (1990) to The Cave (2005), and his associates, and I’m pretty sure that the only reason why the film is founding remembered is because of these monsters but it is all packaged in an overall mediocre film that is best for fans who originally saw the film when it came out and not by someone like me who cannot appreciate it having never grown up with it.

Director Genie Joseph directed only one other feature other than this (the following year’s Mind Benders) before becoming a producer and disappearing into obscurity but this film remains one of those elusive cult classics.
Posted by Kevin L. Powers at 1:35 PM