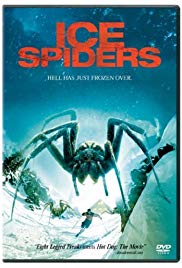 Director Tibor Takacs’ Ice Spiders (2007) is about as ludicrous and entertaining as most of his films having been directed the cult favorites The Gate (1987) and its sequel Gate 2 (1990) and I, Madman (1989), among many others.  The biggest fault with his films in this modern day and age is the over reliance on CGI good, bad, and otherwise.  You get a lot of the otherwise in this film.

The film concerns former ski bum Dash Dashiell (Patrick Muldoon) whose fed up with teaching rich people at the ski resort the “fine art” of skiing when they would rather just be having a good time.  When Dr. April Sommers (Vanessa Williams) military science experiment of deadly mutated spiders decides to jump ship from the secret government laboratory on the mountain everyone’s lives are nothing more than spider-food.  Unbeknownst to Sommers her spiders were injected with a growth hormone to speed up their growth and aggression and now they are bigger, stronger, and more deadly than she could have possibly imagined.  And did I also mention that the cold has no effect on them whatsoever?

Now Sommers must team up with Dashiell to protect the survivors on the mountain and find a way to outsmart and kill the giant spiders before they all become spider-food.  The whole film is pretty ludicrous but Muldoon and Williams are game and keep the film entertaining even through all the bad CGI spiders.  Even legendary producer Stephen J. Cannell (The Rockford Files, 21 Jump Street, The A-Team, and Stingray, to name a few) shows up in a major supporting role as the owner of the ski resort.

Overall the film is pretty bad and a far cry from Takacs’ previous ‘80s films but he still knows how to entertain regardless.