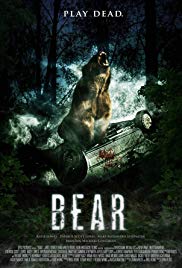 In the world of animal attacks horror films Bear (2010) is one of the few that claims to use a real bear in the modern age of PETA and CGI animals.  Written by Roel Reine and Ethan Wiley and directed by Reine the film concerns two couples (Brandan Michael Coughlin, Patrick Scott Lewis, Katie Lowes, and Mary Alexandra Stiefvater) whose car gets in an accident in the middle of nowhere.  When they are attacked by a bear one of them pulls out a gun and shoots it dead.  Things just get worse when they realize that the bear wasn’t alone and that its mate is very much around and doesn’t take too kindly to the humans coming into its backyard and causing chaos.

With their car incapacitated the four must try to stay alive after all their bullets have been spent and they have nothing to protect them from the second bear other than the safety of their car.  There are a lot of conventional horror plot tropes in the film and the film-makers keep the proceedings moving as the action with the actual bear is entertaining but unfortunately when the bear is the best thing in the film it doesn’t really look well for the under developed human characters or their cliché relationships and complications.

There is some means of substance to be had in the third act, but it comes a little too late to save the overall mediocre film.  If you enjoy bear verses humans (and I do mean it in that order) then you might enjoy this little film otherwise dull humans make for a dull film.