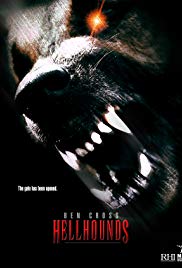 In the film Hellhounds (2009) Greek warrior Kleitos (Scott Elrod) must venture into the Underworld in order to save the soul of his beloved Demetria (Amanda Brooks) who was poisoned.  Time is of the essence as the longer Demetria stays in the Underworld the easier it is for Hades to corrupt and make her his bride.  Through the Underworld, Kleitos and his men must journey down the River Stix and battle vicious hellhounds who want to rid the Underworld of the living spirits who have trespassed.

Despite having subpar CGI for the hellhounds the film is actually quite entertaining as it comes off more as an adventure film than an overall horror film and it doesn’t rely on the hellhounds for a lot of the horrific fun.  There are just as many human monsters as there are monsters from the Underworld in this film which gives the film more personality than your typical B-Movie.  It also helps that the cast is pretty even across the board and do a good job of selling the premise.

The film is directed by Ricky Schroder more known as the actor from Silver Spoons and Lonesome Dove and he brings out the human drama in the film.  The teleplay is written by Jason Bourque and Paul A. Birkett (who also provided the story).  There is nothing in this film that will have jumping up and claiming it’s a cinematic masterpiece but you also won’t leave thinking you’ve just lost ninety minutes of your life that you won’t soon get back.