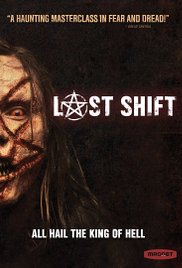 I really enjoyed director Anthony DiBlasi’s adaptation of Clive Barker’s Dread (2009) so I was intrigued for the film Last Shift (2014).  Written by DiBlasi and Scott Poiley the film follows the first day of rookie police officer Jessica Loren (Juliana Harkavy) during the last night of a police precinct set to shut its doors permanently.  By herself at the station, she gets a mysterious phone call from a girl claiming to need help but with no support staff she doesn’t know how she can help.  She also starts to see things and a homeless man seems to be able to get in and out of the station despite all the doors being locked.  Soon she begins to realize that everything is not what it seems to be.

Harkavy is an extremely capable actress who holds her own throughout the film very well.  DiBlasi’s direction is also key to keeping audiences on edge throughout since the film is almost exclusively on Harkavy’s shoulders.  I’m the first to admit I’m not a fan of the “jump scare” and this film is filled with them.  It actually is a crutch for the film as by the halfway mark it seems like that is the only way the film knows how to unnerve the audience and it becomes repetitive really fast.

The film wants to shock and awe but it lacks any real suspense.  Harkavy does a good job keeping the film moving forward but the biggest trick is not boring the audience as they slowly learn the truth about the police station as her character does.  The film isn’t the best of its kind but it does have great make-up FX and a brilliant score that is creepy and fits well with the film.
Posted by Kevin L. Powers at 6:11 PM