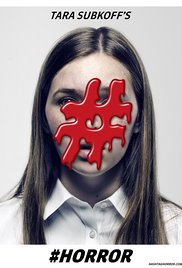 Actress Tara Subkoff writes and directs the horror-thriller #Horror (2015) in which six over privileged children on a sleep over play an obsessive game on their cell phones that leads them to bullying each other.  The evening starts off as something innocent between rich children but as the night draws near secrets are revealed and the bullying between them gets worse.

The film has a better than expected cast in such notable names as Chloe Sevigny, Timothy Hutton, and Balthazar Getty, but the young cast is just as well which is good since they are the ones that carry the whole film.  The production design is amazing as is the cinematography but unfortunately this isn’t much of a horror film until the final third.  For most of the film it plays more as a film about bullying and abuse and less like a horror film except for the voyeur point of view shots throughout.

The film also has too many hashtag graphics thrown within as an element of the style of the film but to me it was more annoying than anything else especially considering the frequency for which they were used.  A little can go a long way.

Overall, the film (despite the excellent make-up FX when they come) will not satisfy horror fans as it doesn’t contain enough essence of a good horror film but it does work as a good dramatic film about bullying as it tells a good story in that regards and it is a well done film nevertheless.
Posted by Kevin L. Powers at 6:17 PM