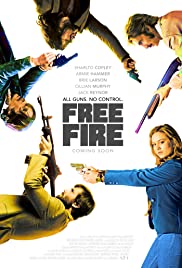 Director Ben Wheatley’s Free Fire (2016) is in the same vein as his Kill List (2011) or Down Terrace (2009) so if you enjoy those films you might enjoy this film which takes a bunch of criminals and throw them in a warehouse for the deal of the century only everything goes completely wrong and its criminal against criminal in a blood bath or carnage and mayhem.

The film has an amazing cast that includes Brie Larson, Sharlto Copley, Armie Hammer, and Cillian Murphy to name but a few of this huge cast.  With a screenplay written by Amy Jump and Wheatley the film is filled with some amazing dialogue which gives the actors some amazing moments of comedy despite the ludicrous set up of the story.  If you have seen some of Wheatley’s previous films, he’s all about characters that have particular issues who are put in unusual circumstances that can be both funny and brutal.

Free Fire is a very brutal film but it is done in such cartoon violence that you can’t help to be taken for the ride.  Now this is a film that may not take itself too seriously and neither should you as all the fun is in entering the film with an open mind and just going along for the ride.  If you can do that then you will enjoy this film.  If not…well, I guess we should just put you in front of the firing squad now.