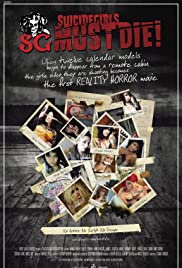 It is time for a weekend photo and filming shoot with all the Suicide Girls and you are all invited in the film Suicide Girls Must Die! (2010).  The Suicide Girls are off to a secluded place to shoot photos for their calendar as well as shoot behind the scenes footage.  Each of the girls are given a camera to film everything throughout the weekend.  Unfortunately, what should have been an innocent weekend of fun for each of the girls turns into murder and mayhem as there is someone out there killing the girls one by one.

Written by Brian Fagan and directed by Sarah Remetch (Sawa Suicide) the film comes off as a reality Big Brother via Suicide Girls as alliances are created and friendships are destroyed as everyone suspects everyone.

If you are not a fan of found footage films then this film may not appeal to you as it plays up everything that you would expect without adding anything new to the genre.  This being said, there is nudity and the makeup FX are good, but some people may be turned away by the constant bickering of the girls especially in the final act.

Going in, I was not expecting too much but I was overall entertained despite not being a fan or knowing a lot about the Suicide Girls brand to begin with.