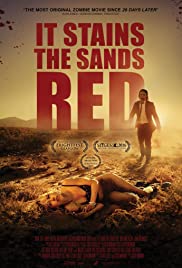 There is a new zombie film in town or at least in Las Vegas which is the setting for It Stains the Sands Red (2017).  The film opens during the beginning of the zombie apocalypse and Nick and Molly (Merwin Mondesir and Brittany Allen, respectfully) are heading to an airstrip to hitch a ride on an airplane headed to safety.  Unfortunately, they have car trouble and get themselves stranded on the highway in the middle of the desert.

When a lone zombie attacks them, Nick is left wounded and Molly is left alone to fend for herself.  Molly, who has lived her life on the glitzier side of life, escapes the safety of the car and makes her way on foot in the desert towards the airstrip.  Unfortunately, the lone zombie decides to follow her.  Now Molly must run as fast as she can through the heat of the desert sun, dwindling supply of water and food, and other dangers.

After a while Molly’s pet zombie which she ends up calling Smalls (Juan Riedinger) becomes not only a thing of danger but of solace as she regains her humanity after having lived a life in Sin City while forgetting the life she had before.  There is more than meets the eye in Molly which audiences will learn as the film progresses.

The film hinges on the relationship between Molly and Smalls as it changes from the beginning when he sees her as food to the final act where she sees herself as his protector when military personnel want to shoot him dead.  Molly goes through a lot and becomes a very strong and willed character through her experiences.

Written by Stuart Ortiz and Colin Minihan (who also directs) crafts a unique take on the zombie film that borrows from George Romero’s Day of the Dead while setting its own course.  This is a film that will satisfy genre and zombie fans.