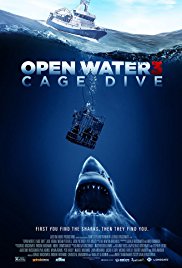 The latest sequel in the ever-expanding franchise OPEN WATER: CAGE DIVE (2017) finds two brothers Jeff and Josh (Joel Hogan and Josh Potthoff, respectfully) and their friend Megan (Megan Peta Hill) decide that the most daring thing for them to do for an audition tape for a reality TV show is to go cage diving with real sharks.  While on the open seas with a couple dozen other daring enthusiasts, a freak wave capsizes their boat causing them to be stuck out in the open ocean in shark infested waters.  Now they must find a way to stay alive until they are rescued with not only deadly sharks still roaming around but lethal secrets that may test all of their friendships.

Written and directed by Gerald Rascionato this film retains the “found footage” style of the previous two films but little else.  Despite having some amazing cinematography from Rascionato and Andrew Bambach, the film’s filled with two-dimensional characters that are not all that interesting and it’s a travesty that the Megan character is a cliché of a woman doing and making all the bad decisions (and down right stupid in some instances) that puts them all in even more danger.

As sequels go, the “found footage” genre should disappear for a few years so that the conventions can be later re-invented as this film offers nothing new or interesting for either the genre itself or fans of these types of films.  Only those that have been sticking with the franchise need bother with this latest entry.