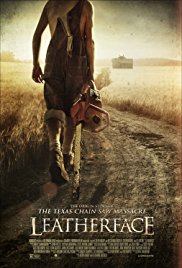 The latest prequel/remake/reboot to the Texas Chain Saw Massacre arrives with the origins of our favorite killer Leatherface (2017) which strives to tell the story on how Leatherfae became the infamous killer we now know and loathe.  Verna (Lilli Taylor) has been taking care of her boys for a long time until one day they end up killing Sheriff Hal Hartman’s (Stephen Dorff) daughter.  As punishment, he takes Verna’s youngest boy away from her and places him in a halfway house.

Years later, Verna is still trying to get custody of her boy when a break out at the halfway house leaves several people dead and nurse Lizzy (Vanessa Grasse) prisoner to three of the children from the halfway house.  Now Lizzy must find a way to stay calm as she finds herself in the middle of a murder spree and a deranged Sheriff will stop at nothing to recapture the children at any costs.

Written by Seth M. Sherwood and directed by Alexandre Bustillo and Julian Maury this is a violent and unforgiving film in the same vein as the latter Chainsaw films.  The film pays homage to the legacy of the original film (while ignoring most of the previous film Texas Chainsaw 3-D) which is to be expected from Bustillo and Maury who crafter the film Inside (2007).

Keeping the true identity of who ultimately becomes Leatherface among the four hospital escapees is a new added level to the franchise but I’m not convinced it was needed but that is a small gripe for a film that does a good job of trying to appease fans of the franchise.  The film may not succeed on all levels but it does do a good job of keeping the legacy alive and relevant at a time when most horror “old school” horror franchises have already seen their final days.