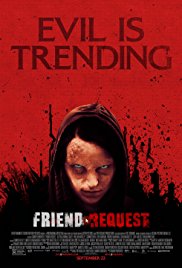 Social media will never be the same in the horror film FRIEND REQUEST (2016) that sees popular college student Laura (Alycia Debnam-Carey) confront her greatest fear when she “unfriends” someone on a networking site. Laura has a good life.  She’s successful in school.  She has a great boyfriend. She has lots of friends.  She also has a stalker by the name of Marina (Liesl Ahlers) whom she unwittingly friends on a networking site thinking that the girl just needs a friend.  When Marina, who is an artist with dark and gothic overtones, starts to squeeze herself into Laura’s life Laura tries to end her friendship.  Marina doesn’t take being unfriended lightly and ends up committing suicide by filming it on her laptop and putting on social media for everyone to see.  Thinking that she may have been a reason for Marina’s suicide, Laura’s guilt and life gets weird as her friends start to die around her and videos of their deaths are posted on her social media site.

Everything get worse when there is no way for her to delete the death videos nor shut down her site.  It seems that someone or something is taking over her personae online.  She gets blamed for the death videos; the cops think she has something more to do with the cases than she is saying; and it seems as though Marina is still manipulating her from beyond the grave.  Now she must figure out what is going on before all of her friends die leaving her the only one left with a connection to Marina.

Although the production values are good, the film lacks suspense or any sense of horror.  There is nothing in this film that you haven’t seen done better in other films.  It’s actually hard to believe that the film is Rated “R” as it contains very little gore, sex, or even profanity and is way too tame for the typical horror fan.  If not for Debnam-Carey the whole film would be completely forgettable as it is good to see her in something other than the hit TV series Fear the Walking Dead.