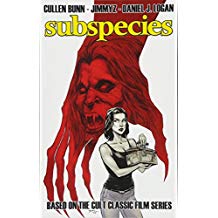 The Vampire Radu returns in an all-new story in Action Lab Comics’ Full Moon Presents: Subspecies.  Taking place right after the events of the cult favorite Full Moon Entertainment franchise Subspecies, this new series finds Michelle (a former college student whose friends had all been killed in the films and herself turned into a vampire by Radu) working as a nighttime nurse in a hospital under the name of Shelly.  After having killed Radu four times, she’s trying to put her life back in order by helping people and living off the Bloodstone (a stone that can feed her bloodlust so that she doesn’t have to feed off real people to survive).  Then one night, Radu returns but it’s not quite the Radu she remembers.  It appears that the essence of Radu has been split into five separate vampires who all seek the Bloodstone.  Now Michelle has to find a way to defeat not one but five of her worse nightmares.

This story is written by Cullen Bunn & Jimmyz with art by Daniel J. Logan.  This story fits more in line with fans of the films and less about trying to bring on new fans but for readers familiar with the films this story gets straight into the action and carnage without a lot of (unnecessary) set up and exposition.  Bunn & Jimmyz fills the story with tons of references to the films and Logan’s style of art is perfect for the story as he knows how to bring out the menace and savagery of this vampire story.

The graphic novel is filled with extras but the most interesting are snippets from the actual script used and the steps to the final artwork.  This will interest readers with interest in the process of how the comic was crafted.