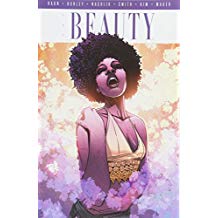 Jeremy Haun & Jason A. Hurley craft an even more engaging and intricate chapter in the world of The Beauty Vol. 4 (Issue #17-21).  The story of The Beauty follows a sexual transmitted disease that makes people “beautiful” and who wouldn’t want that?  When people with The Beauty start to mysteriously die people start to wonder whether or not The Beauty is responsible or if there is something more nefarious going on.  The series does a great job as an anthology focusing on different aspects and characters of the world and how they are affected by the disease (whether some people see it as such or not).

In this volume Cooper is a journalistic blogger who gets involved with a whistle blower who works for Abericorp, a corporation who has deep ties with The Beauty.  Cooper, seeing a cover-up, tries to learn as much as he can to expose the truth about what Abericorp knows about the truth of The Beauty even if it puts his life in dangerous.

Haun & Hurley know how to craft a story build around corporate espionage, government secrets, and the truth in journalism in the hopes of bringing “the truth” to the people before it’s too late.  From the very first issue of this engaging and electrifying series what may have started as a simple story about an infectious disease that makes people “beautiful” has become a cautionary tale about so many other things.  You’d think that presenting the stories in an anthology format would be detrimental to the overall series, instead, it allows the whole series to constantly introduce new characters that the reader cares about even if you don’t know their fate.

Matthew Don Smith (Issue #12) and Thomas Nachlik (Issue #18-21) have different styles but they compliment the entire series and especially each of the individual stories that are being told.  This is one of my favorite series and it just gets better and better.