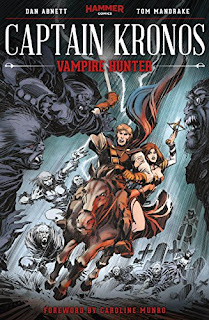 Titan Comics’ collected graphic novel of Captain Kronos: Vampire Hunter is a love letter to the original Hammer Studios film of ’74!  Written by Dan Abnett with art by Tom Mandrake this story follows the events of the original film with Captain Kronos and his sidekick Grost and the latest addition to the team Carla who find themselves on a trail of a new vampire Porphyr.  Upon dispatching Porphyr, Kronos and his team find themselves outside the border town of Serechurch, which they soon learn is under the spell of an even more deadly menace which may be the greatest vampire threat that Kronos may have ever encountered.

For both fans of the film and vampire fans in general, this new tale is both entertaining and exciting.  Mandrake’s art is a perfect fit for the period setting of the story and has some amazing similarities to the artwork you’d see in the old EC Comics.  Abnett’s story is very vibrant and to the point but still retains the cadence of the characters from the film while also making Carla a more modern woman who has come as her own as a vampire hunter.

The is one of the first of the new Hammer Comics titles from Titan Comics who seem to want to be faithful to the original films while also trying to attract new fans for a new generation.  Despite never having a sequel, the Captain Kronos film has a huge following for which fans will be able to appreciate how much this new story feels like an authentic sequel to the film.

Caroline Munro, who was Carla in the original film, provides a Foreword while there is a collection of great interviews at the end to help readers enjoy the legacy of Captain Kronos.